A possible answer to the hard problem of consciousness: subjective experience is communication

Posted on December 19, 2016 by SelfAwarePatterns

In 1995, David Chalmers coined the “hard problem of consciousness”:

It is undeniable that some organisms are subjects of experience. But the question of how it is that these systems are subjects of experience is perplexing. Why is it that when our cognitive systems engage in visual and auditory information-processing, we have visual or auditory experience: the quality of deep blue, the sensation of middle C? How can we explain why there is something it is like to entertain a mental image, or to experience an emotion? It is widely agreed that experience arises from a physical basis, but we have no good explanation of why and how it so arises. Why should physical processing give rise to a rich inner life at all? It seems objectively unreasonable that it should, and yet it does.

…The really hard problem of consciousness is the problem of experience. When we think and perceive there is a whir of information processing, but there is also a subjective aspect.

Chalmers was giving a label to an issue that has existed for a long time, but his labeling of it has given many a clarity on why they find many scientific explanations of how the brain and mind work to be unsatisfactory.  Bring up the scientific understanding of consciousness, and someone is going to ask why all the data processing is accompanied by experience.

My last post discussed a movement in the philosophy of mind to label this distinction as an illusion.  And to be clear, I do think the idea that experience is something separate and apart from the information processing of the brain is an illusion.  That’s not to say that I think subjective experience itself doesn’t exist in some form.

But that still leaves the question of why we have subjective experience.  In earlier posts, I’ve noted that to have any hope of answering that question, we have to be willing to ask what experience actually is, and gave my answer that it is a system building and using internal models of the environment and of itself, in essence an inner world, as a guide to action.

I still think this answer is true, but in conversation with fellow blogger Michael, I realized that there may be a better way of articulating it, one that may resonate a little better with those troubled by the hard problem, at least with those open to explanations other than substance dualism or speculative exotic physics.

I think subjective experience is communication.

Consider that every aspect of experience seems to have a communicative value.  Using the examples Chalmers gave in the quote above, the deep blue communicates information about the object being modeled such as maybe a deep lake, and the sensation  of middle C communicates something about the environment (or given the nature of music, or art in general, the illusion of something).

Now, the question you’re probably asking is, communication from what to what?  I think the answer is communication from various functional areas of the brain to the movement planning areas.  The source areas include the sensory processing regions, which model the information coming in from the outside world, and the limbic system, which adds valences to the models, that is judgments of preference or aversion. 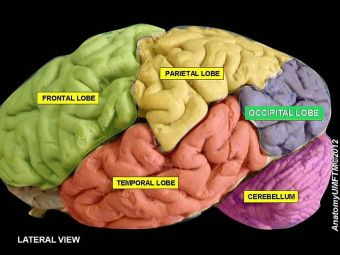 Of course, as I noted in the post on consciousness being predictive simulations, this is actually a two way communication, because those movement planning regions instigate simulations that require participation of all the source regions.  But what we call experience itself, may be the preparation and transmission of that information to the executive centers of the brain, executive centers whose job it is to fulfill the main evolutionary purpose of brains, to plan and initiate movement.

One quick clarification.  This isn’t an argument for a homunculus existing in those executive centers.  This isn’t the Cartesian theater.  It’s communication from the sensing and emotion subsystems of you to the action oriented subsystem of you, and consciousness involves all the interactions between them.

Now, it’s almost certainly possible to find aspects of experience that science doesn’t have a communicative explanation for yet.  But is it possible to find any for which there is no conceivable explanation?  Even if there is, even if we can find the odd part here or there that has no imaginable explanation, if we can find ones for the vast majority of qualia, doesn’t that mean that most of them are fulfilling a communicative function?  And that experience overall is generally about communication?

Indeed, if you think about it, isn’t this type of communication crucial for a brain’s evolutionary purpose?  How else can the movement planning portions of the brain fulfill their function other than by receiving information from the input processing and evaluative portions?

If so, for a philosophical zombie to exist, it would need to have an alternate mechanism for this communication.  But why wouldn’t that alternate mechanism not simply be an alternate implementation of subjective experience?  If this view is correct, zombies are impossible, at least zombies sophisticated enough to reproduce the behavior of a conscious being in a sustainable manner.

So, this seems to be a plausible explanation for what experience is, and why it exists.  It seems like a possible answer to Chalmers’ hard problem.

Unless of course, I’m missing something?  In particular, what aspects of subjective experience might not fit this conception of it?  Are they significant enough to discount the answer?  Or are there other problems I’m not seeing?

78 Responses to A possible answer to the hard problem of consciousness: subjective experience is communication