The sensorium, the motorium, and the planner

Posted on March 4, 2019 by SelfAwarePatterns

I’ve been reading Gerhard Roth’s The Long Evolution of Brains and Minds. This a technical and, unfortunately, expensive book, not one aimed at general audiences, but it has a lot of interesting concepts.  A couple that Roth mentions are the terms “sensorium” and “motorium.”

What’s interesting about this is that sensoriums and motoriums are ancient, very ancient.  They predate nervous systems, and exist in unicellular organisms.  Often these organisms, such as bacteria, have motoriums that include movement via flagella, tiny motors that propel them through their environment.

Their sensoriums often include mechanoreception, the ability to sense when an obstacle has been encountered, and this triggers the flagella to temporally reverse direction for a brief time, followed by a programmed change in direction, and subsequently by forward motion again.  This is typically repeated until the organism has cleared the obstacle.

These organisms also often have chemoreception, the ability to sense whether the environment contains noxious or nutritious chemicals, which again can cause a change in motion until the noxious chemicals are decreasing or the nutritious ones increasing.  Some unicellular organisms even have light sensors, which can cause them to turn toward or away from light, depending on which is more adaptive for that species.

Reading about these abilities, which in many ways seem as sophisticated as those from simple multicellular animals, and given the evolutionary success of these organisms, you have to wonder why complex life evolved.  (There are many theories on why it did.)  But it’s interesting that the earliest multicellular organisms, such as sponges, actually seem less responsive to their environment overall than these individual unicellular life forms.

It’s also interesting to consider what is different between the sensorium of these unicellular and simpler multicellular organisms, and those of more complex animals such as amphibians, mammals, birds, arthropods, and the like.  Obviously the addition of distance senses dramatically increases the size of the sensorium, allowing an organism to react to more than just what it directly encounters, but also by what it can see, hear, or smell.

When we remember that some unicellular organisms have light sensors, and that the evolution in animals from light sensor to camera-like eye is a very gradual thing, with no sharp break between merely detecting light, having multiple light sensors to detect the direction of light, and forming visual images, then the addition of distance senses starts to look like a quantitative rather than qualitative difference.

But distance senses and complex behaviors require interaction between the motorium and sensorium.  In essence, this involves higher order functionality in the motorium interrogating the sensorium for both past perceptions and future scenarios.  A good name for this higher order functionality could be “the planner”.  (I considered “imaginarium”, but that sounds too much like an amusement park attraction.) 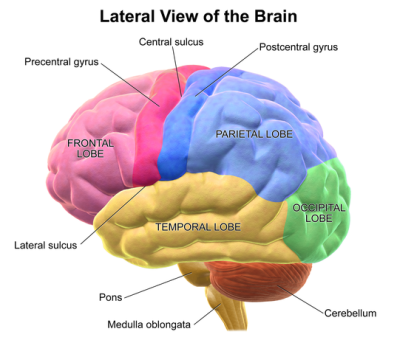 Lobes of the brain
Image credit: BruceBlaus via Wikipedia

In the human brain, the sensorium seems to primarily exist at the back of the brain.  It includes the temporal, occipital, and parietal lobes.  The top part of the parietal lobe is a region sometimes called the posterior association cortex.  This is the center of the human sensorium.  (There is also a simple sensorium in the midbrain, but it appears to operate somewhat separately from the thalamo-cortical one.)

The motorium exists at multiple levels.  The lower levels are in the brainstem and basal ganglia.  Together these handle reflexive and habitual movement respectfully.  The higher order motorium, the planner, is in the frontal lobe cortices, including the prefrontal cortex and premotor cortex.

Neuroscientists often say that consciousness requires activation of both the frontal lobes and posterior association cortex.  (This is sometimes referred to as the “fronto-parietal network.”)  The reason for this is the communication between the motorium planner and the sensorium.  It may be that full phenomenal consciousness requires this interaction, with qualia in effect being the flow of information from the sensorium to the motorium planner.

But there is some controversy that the motorium is required for phenomenal awareness.  Many neuroscientists argue that the sensorium by itself constitutes consciousness.  The problem is that a patient with pathologies in their motorium usually can’t communicate their conscious state to anyone, making determining whether they’re conscious somewhat like attempting to see whether the refrigerator light stays on when the door is closed.

Neuroscientist Christof Koch points out that patients with frontal lobe pathologies who later recovered, reported having awareness and perception when their frontal lobes were non-functional but simply not having any will to respond.  But even this leads to the question, were they fully conscious when they laid down those memories?  Or is “consciousness” just a post hoc categorization we’re attempting to apply to a complex state on the border?

So we have the sensorium and the motorium, which predate nervous systems, going back to unicellular life.  What seems to distinguish more advanced animals is the communication between the sensorium and motorium, particularly the higher level motorium planner.  And this might converge with the view that full consciousness requires both the frontal lobes and parietal regions.

Unless of course, I’m missing something?

25 Responses to The sensorium, the motorium, and the planner