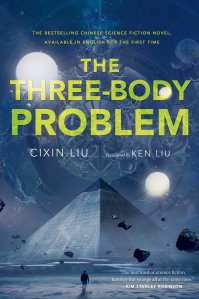 Cixin Liu’s ‘The Three-Body Problem‘ is getting a lot of attention.  It’s a popular and award winning science fiction novel in China that has recently been translated into English by Ken Liu, to considerable acclaim.  It’s been nominated for both the Nebula and Hugo Awards.  (Note: if you’re following the current Hugo nomination debacle, this book is not on either of the Puppy slates.)  It’s also being made into a movie in China.

I bought it several months ago, but it took me a while to finally sit down and read it.  Once I did, it was the kind of book I ended up racing through in a couple of days.

The story ranges over several decades of Chinese history, starting in the Cultural Revolution and finishing in the near future (at least as of when the novel was originally written).  It then broadens to encompass a world wide conspiracy, and finally an interstellar one.

The book explores a ton of fascinating ideas, from how science works, to an alien society that exists in a brutal and treacherous environment.  At the core of the story is that alien society, and the central scientific problem of its environment that it tries to solve throughout its history.  After many millions of years and devastating civilizational collapses, it finally comes to the conclusion that, due to chaos theory, the problem is unsolvable and so, for its own survival, it has no choice but to seek another home.

Some time afterward, a scientist on Earth discovers a way to magnify a signal from Earth by bouncing it off the Sun, using the power of the Sun to broadcast the message, making it far more visible across interstellar distances.  The friendship message is responded to by someone from the civilization above, but by someone who claims to be a pacifist urging that Earth not reply, because to do so would be to invite certain invasion.  For reasons that are clear in the story, the scientist does reply, and invites the invasion.

While this is hard science fiction, and many of the characters aren’t the most drawn out, particularly the side characters, the core characters nonetheless all act for understandable reasons.  None of them seem like plot placeholders.  We see the background of the person who turns out to be the central villain, and its not hard to see why they have the motivations that they do.  And, of course, we see enough of the history of the alien race to understand their motivations, even if those  motivations make them humanity’s enemy.

The fact that this is a work translated from Chinese makes for some awkward reading, particularly in the early chapters.  As an American reading this book, the first alien society that I had to navigate was the Chinese one.  As someone with only a cursory knowledge of the Cultural Revolution, I learned some things.  (Supplemented by numerous Wikipedia breaks.)  But the sheer storytelling ability of the author soon transcends any cross cultural barriers.

So, if hard science fiction, including long descriptions of scientific and technological concepts, is your cup of tea, I highly recommend this book.  There are a few places where I found the science questionable, inaccurate, or dated, but it wasn’t enough to hurt my enjoyment of the overall story.

This book is actually the first in a trilogy.  The second book appears to have already been translated.  I will definitely be reading it.

3 thoughts on “The Three-Body Problem”