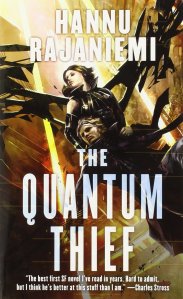 Most visions of society after the singularity (or something like the singularity) tend to be utopias, or near utopias.  Rajaneimi’s vision is far darker and more mixed, with some aspects being nightmarish.  Of course, from a story perspective, that actually makes for more fertile ground.

In the Quantum Thief universe, a posthuman civilization 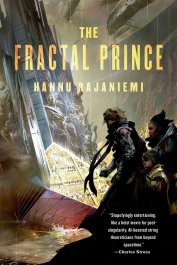 exists throughout the solar system, spread between numerous societies.  Mind uploading developed prior to AGI (artificial general intelligence).  Raw AGI itself has proven to be extremely dangerous and AGIs are referred to as “dragons.”  They are rarely released due to their ravenous and uncontrollable nature.  (Rajaneimi, in an interview, stated that this is not necessarily how he expects things would be, but that it was a useful plot device to restrain the story to being between human-like agents.)

The most powerful society in the inner solar system is the Sobornost, a series of collectives with billions of

minds, referred to as “gogols” in the story.  Gogols are either uploaded human minds or minds created in the template of human minds.  Just about every piece of Sobornost technology involves the use of legions of gogol slaves, implying that for much of humanity, existence has been reduced to the role of mind slaves.  The Sobornost is divided between physical substrates called guberniyas, with each one ruled by a “founder”, presumably one of the people who developed the Sobornost system.

The outer solar system is ruled by a series of collectives referred to as “Zokus”, which are initially presented as gaming circles.  But as the story progresses, it becomes apparent that Zoku society refers to just about any endeavor as a “game”, with an overarching governing authority referred to as the “Great Game” Zoku.   Zoku society appears to be far more appealing than the Sobornost, and they are essentially the Sobornost’s primary power rival.

But there are several other societies.  One is the Oubliette, a city on Mars that is on huge mechanical legs so that it can keep moving to avoid nanobot infections infesting the Martian surface.  The Oubliette society is a posthuman one, but one where everyone lives in human form, except when doing a tour of duty running the city’s machinery.  Every citizen also has control of just how much information they share in social interactions with others.

Another society is the city of Sirr, the last outpost of humanity on Earth, situated somewhere in the Middle East region, and constantly having to protect itself from Earth’s version of nanobot infections, referred to as wildcode.  And Oort, a society of humans living in the Oort cloud, the vast regions of cometary bodies extending for up to two light years from the Sun.  There are also references to societies of bear like creatures (presumably posthumans who adopted that shape for some reason) in the asteroid belt, as well as various mercenary clans.

The story begins with the main protagonist, a thief named Jean le Flambeur, serving time in a the “Dilemma Prison”, a virtual prison where prisoners are forced to regularly undergo painful prisoner dilemmas, a game theory exercise that, presumably, is meant to teach them that tit-for-tat is the most successful strategy, reforming them for society.  le Flambeur is rescued from the prison by the story’s other protagonist, Meili, a warrior from Oort working for the Sobornost.  le Flambeur’s thief skills are needed for a mysterious mission.

The stories go on to explore a number of concepts, such as how reliable our memories can be, the concept of self, whether or not and to what degree we have free will, and what it means to be human.  There are a lot of interesting ideas in these books, and plenty of action to keep things exciting.  And much of what is presented at the beginning is not how it appears.  If you like posthuman science fiction, I highly recommend them, with a qualification.

That qualification is that the prose is very dense.  Rajaneimi introduces new concepts without explanation and counts on the reader picking up their meaning through context, which I for one wasn’t always able to do.  I actually found the first and last books manageable in this regard, with an occasional Wikipedia break helping, but the middle book was a tough slog, with many concepts given names from Islamic spirituality and/or Arabian mythology, whose meanings often weren’t readily available from quick Google searches.

In some cases, I suspected the dense prose masked scientific or plot weaknesses.  And some concepts never seem to get an adequate explanation, with several interpretations of the narrative possible.  I’m generally not a fan of this type of writing, and probably wouldn’t have tolerated it if Rajaneimi’s story and universe hadn’t been so compelling.

But they are, and that’s why, despite its flaws (which some might see as strengths), I still recommend these books.

4 thoughts on “A darker vision of the post-singularity: The Quantum Thief trilogy”