A couple of years ago I did a series of posts inspired by Todd Feinberg and Jon Mallatt’s excellent  The Ancient Origins of Consciousness, a book on the evolution of animal consciousness.  Somewhat building on what I had read in Antonio Damasio’s Self Comes to Mind, it was a pivotal point in my exploration of consciousness science.  Feinberg and Mallatt shook me out of my human centered understanding of consciousness, one that was largely focused on various forms of metacognition. 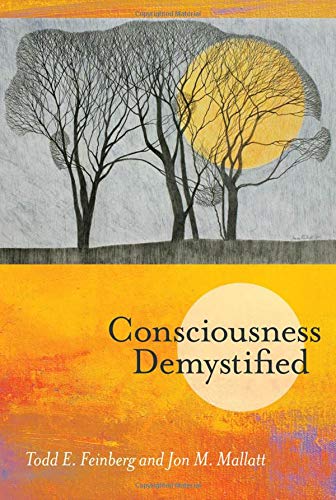 They’ve written a new book, Consciousness Demystified.  Unlike their first book, this new one is much more approachable for general readers, although it covers the same basic topics, albeit updated with some new concepts that have come along since the last book.

Image based consciousness is interesting because the image maps, the neural firing patterns in the early sensory regions in the brain, are topographically or isomorphically mapped to the surface of the sense organ.  So the pattern that the photoreceptors on the retina are activated in is preserved in the bundle of axons that project up the optic nerve to the thalamus and then to the visual cortex.  A similar relationship exists for touch where each body part ends up being mapped to particular regions in the somatosensory cortex.

But image based consciousness, perception, is more than just these initial firing patterns.  It includes the patterns of neurons activated in later neural layers, layers that map associations, where a particular pattern gets mapped to a concept.  Eventually these layers become integrated across the senses into multi-modal perceptions, such as a piece of food, or a predator.

Many consider affective consciousness, sentience, the ability to feel, to be consciousness.  But in principle there’s no reason that an organism can’t have image based consciousness with only reflexive reactions to the contents of that consciousness, to essentially only have perception paired with unthinking action.

The authors talk about criteria that can be used to determine whether a particular animal has affective consciousness:

(As I’ve discussed in other posts, I think affect awareness is closely associated with imaginative simulations, which if you think about it, are necessary to meet all of these criteria, except possibly 3.)

One omission a consciousness aficionado may notice here is self reflection, introspective self awareness, metacognition.  Feinberg and Mallatt explicitly exclude this from their scope.  Their focus is on primary consciousness, also known as sensory consciousness, which could be equated with phenomenal consciousness.  (Although this last association is controversial.)

Most of their discussion is focused on vertebrates, but the authors do spend time exploring the possibility of invertebrate consciousness.  As they did in their first book, they express reservations about the tiny brains of insects, but on balance conclude that many arthropods are conscious to one degree or another, as well as cephalopods (octopusses, etc).  Given the early divergence of these evolutionary lines, consciousness appears to be an example of convergent evolution.

They finish up with a discussion of the hard problem, introducing two terms: auto-ontological irreducibility and allo-ontological irreducibility.  The first refers to the fact that the brain has no sensory neurons, and we have no introspective access to its lower level processing, which means that we can never intuitively look at brain operations and feel like they reflect our subjective states.  The second refers to the fact that an outside observer can never access the subjective state of a system, if it has one.  Together these create an uncrossable subjective / objective divide, although understanding why the divide exists can drain the mystery from it.

My recommendation for this book is qualified.  If you didn’t read their earlier technical book, then this more approachable version may well be worth your time, particularly if the technical nature of the early book was what made you avoid it.  That said, if you’re not comfortable looking at anatomical brain diagrams, this still may not be your cup of tea.

But if you did read that earlier book, I’m not sure this new one has enough to warrant the time and money.  It does contain some concepts that came up in the last few years, as well as descriptions of new experiments and research, but you have to be a serious brain geek like me to make it worth it.

Finally, I can’t resist mapping the categories Feinberg and Mallatt discuss into the hierarchy of conscious capabilities I often use to discuss this stuff.

This hierarchy was, in many ways, inspired by Feinberg and Mallatt’s earlier book.