The difficulty of interstellar travel for humans

Posted on July 22, 2017 by SelfAwarePatterns

Futurism.com has an article reviewing the results of a survey they conducted with their readers asking when the first human might leave the solar system.  The leading answer was after the year 2100, which make sense given our current level of progress just getting humans back out of low Earth orbit.  But I think the prospects for human interstellar exploration are far more difficult than most people realize.

First, when pondering this question, we can forget about the traditional sci-fi answers of hyperspace, warp drive, or similar notions.  These concepts are fictional plot devices with little or no basis in science.  Even concepts that have been considered by scientists, such as wormholes and Alcubierre warp drives, are extremely speculative, requiring that certain speculative and unproven aspects of physics be true.

Getting anything like these types of technology will require a new physics.  Undoubtedly, we will learn new things about physics in the decades and centuries to come, but the probability that what we learn will enable interstellar travel to function like sea travel (the preoccupation of most space opera stories) is an infinitesimal slice of the possibilities.

The only way to speculate scientifically on this kind of thing is to take the science that we currently have and try to extrapolate from it.  When we do that, the obstacles to human interstellar flight seem pretty daunting.

Worrying about the speed of light limit, which current physics tells us is the ultimate speed limit in the universe, is sour grapes to a large extent.  Even getting to an appreciable percentage of the speed of light turns out to require astounding amounts of energy.  Doing it with our current chemical rocket technology is a lost cause.  According to Paul Gilster, in his book Centauri Dreams, Imagining and Planning Interstellar Exploration (which I recommend for anyone interested in this subject, as well as his blog), it would take more mass than exists in the visible universe to propel a chemical rocket to a substantial fraction of the speed of light. 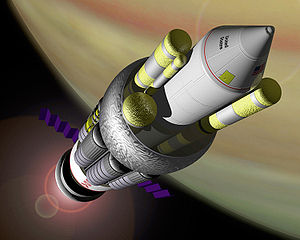 Of course, there are better, more efficient propulsion options that might eventually be available.  For purposes of this post, let’s leap to the most efficient and plausible near term option, nuclear pulse propulsion.  This is a refined version of an original idea that involved lobbing nuclear bombs behind a spacecraft to push it forward.

Giltster, in his book, notes that a nuclear pulse propulsion spacecraft, to reach 10% of light speed, would need a mass ratio of 100:1.  This means that for every kilogram of the spacecraft with only its payload, you’d need 100 kilograms of fuel.   Initially, that doesn’t sound too bad since the Apollo missions had an overall mass ratio of 600:1.  But that was for the entire mission, and all we’ve considered so far is the mass ratio to accelerate to 10% of light speed.  We haven’t talked about slowing down at the destination.

In space, given inertia and no air friction, slowing down takes just as much energy as speeding up.  And the kicker is that you have to accelerate the fuel you’ll later need to decelerate.  So slowing down doesn’t just double the mass ratio from 100:1 to 200:1.  The deceleration fuel has to be on the “1” side in the initial acceleration ratio.  That means the ratio for the overall mission (and we’re only talking about a one way mission here), has to be squared, taking it from 100:1 to 10,000:1.

Traveling at 10% lightspeed gets us to Proxima Centauri, the nearest star to the sun, in about 43 years.  When you consider what kind of living space a human crew would need for that time span, and multiply it out by 10,000, an interstellar mission starts to look like the most expensive thing human civilization might ever attempt.  It gets worse if we try to shorten the time span.  Increasing the speed to 20% of light speed raises the ratio to 100,000,000:1.

Imagining antimatter technology might improve the mass ratio substantially.  But it adds new difficulties.  Producing antimatter itself takes tremendous amounts of energy.  It would have to be manufactured and stored in deep space, since any containment failure of any substantial amount would likely result in a gigaton level explosion.  We might save on the mass ratio of the spacecraft, but only at the expense of vast resources dedicated to generating and storing the fuel.  And human crews would likely have to be heavily shielded from the gamma rays generated by antimatter reactions, increasing mass throughout the overall craft.

No discussion of this type is complete without at least mentioning the Bussard ramjet, the idea of a spacecraft with an immense ram scoop to take in interstellar dust to use as fuel.  There was a lot of excitement for this concept in the 60s and 70s, but further study has shown that the interstellar medium isn’t nearly as thick as the initial design hoped for, and many think the ram scoop would generate as much friction as thrust.

Other options are to forego rocketry altogether and go for something like light sails.  Robert Forward, decades ago, put forth a design where a gigantic laser on Mercury would send out a beam to an interstellar light sail spacecraft, steadily accelerating it.  At some point, the craft would separate its sail into two components, one of which would be hit by the laser and reflect it back to the remaining component attached to the craft, decelerating it.  Forward’s design is ingenious, but it would still require titanic amounts of energy, and precise coordination across centuries and light years to work.

Things get a lot easier if we just think about sending uncrewed probes.  That’s the current direction of the Starshot Breakthrough initiative.  The idea is to propel a small, perhaps gram sized probe, to 20% of light speed using Earth based lasers.  The probes would reach Proxima Centauri in about 22 years, taking pictures and readings as they fly through the system, and transmitting the information back to Earth.  There are still major technological hurdles to overcome with this idea, but they all seem achievable within reasonable time periods and with reasonable amounts of energy.

The big drawback to the Starshot design is that it doesn’t have any way to slow the probe down, so everything would have to be learned in the few hours available as it sped through the target system.  An alternate design has been proposed, using the unique topology of the Alpha Centauri / Proxima Centauri system to slow down the probe, but at the cost of increasing the travel time to over a century.

But once we give up the idea of crewed missions, the rocket solutions actually become more plausible.  A 10,000:1 ratio doesn’t seem problematic if the ultimate payload is a one gram probe.  Even the 100,000,000:1 ratio associated with a 20% light speed mission starts to look conceivably manageable.

And when we consider the ongoing improvements in artificial intelligence and the idea of probes building their own daughter probes to explore the destination system, and perhaps even to eventually launch toward systems further out, the possibilities start to look endless.

All of which is to say, that it’s much easier to conduct interstellar exploration with robots, particularly very small ones, than with humans.  It seems likely that we’re going to be exploring the stars with robots for a long time before humans get there, if they ever do.

Unless of course I’m missing something?

25 Responses to The difficulty of interstellar travel for humans