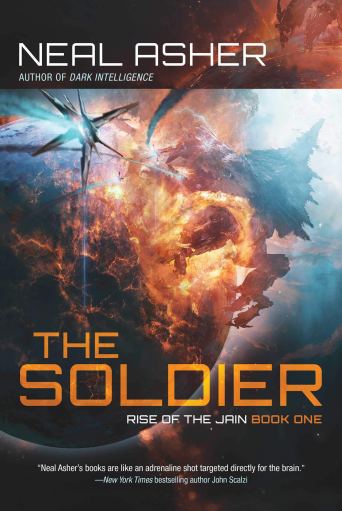 I’ve recommended Neal Asher’s books before.  He writes epic space opera where the stories take place over a vast scale, most of the characters are superhuman or alien entities, and the forces involved are titanic.  That was the motif of his Transformation series that I recommended back in 2017.

Like that series, The Soldier, which begins a new trilogy titled Rise of the Jain, takes place in a shared future interstellar setting that most of Asher’s stories share.  Earth lies at the center of an interstellar society called the Polity, which is ruled by AIs that are (generally) benevolent toward the humans.

The humans are generally enhanced to varying degrees such that baseline natural humans don’t really exist anymore.  Enhancements come in a lot of different forms, including changes to just make the person more physically robust, cyborg enhancements, human / AI hybrids, or just uploading into an AI crystal (the advanced quantum computing substrate in these stories).  Some humans also are enhanced after contracting an alien virus that gives them superhuman strength, resilience, and longevity (albeit at the potential cost of turning into something monstrous if they are injured too severely).

The Polity has an old enemy, the Prador, an interstellar kingdom of vicious crab like creatures with which it fought an epic war centuries ago, but now maintains a sort of detente.  The detente includes a neutral zone type region called The Graveyard.  The Prador seem to be an ever evolving concept in these stories, with the ones in this one continuing to show their development.

The main focus of this book is an ancient technology that is occasionally found throughout the galaxy, called Jain technology, named after an ancient but extinct species, the Jain.  Jain tech always appears to provide powerful benefits, but it is always a trap, a trap calculated to destroy civilizations.  So it is heavily proscribed and controlled.  Of course, that doesn’t stop some people from attempting to play with it, often with catastrophic consequences.

It turns out there is an accretion disk, a developing solar system, that is heavily infested with Jain technology.  The beginning of the book describes a team of AIs led by a human-AI hybrid named Orlandine, who guard the accretion disk to prevent the technology from escaping.  Orlandine herself is infested with Jain technology, but it apparently able to control it.  Her and the AIs are assisted in guarding the accretion disk by an ancient alien AI named Dragon, although Dragon’s motives are often obscure and it’s not always clear just how much of an ally it actually is.

Orlandine has a plan to conclusively eliminate the threat of the Jain tech in the accretion disk.  But Dragon fears a trap, and sets in motion a plan to delay her.  This in turn sets off a cascade of events leading to, among other things, resurrection of an alien AI hostile to both the Polity and the Prador who ends up going on a quest of self discovery, incubation of an ancient Jain artifact that turns out to be a Jain soldier (giving the book its title), and destruction and battles galore.

Similar to the Transformation series, the story is told from the perspective of several characters.  Asher is fearless in taking the viewpoint of utterly alien characters, so we get the perspective of human-AI hybrids, enhanced humans, straight out AIs, alien AIs, and even (briefly) a Jain AI.  This does an excellent job at adding dramatic tension to the story.  It also makes many characters, even one hostile to humans, far more sympathetic than they would otherwise be.

My only beef with this move is that, when describing the internal motivations of utterly alien characters, Asher ends up working in a lot of phrases like, “as the humans would say,” or, “like an Earth centipede,” from characters that seem unlikely to have their thoughts dominated by how humans think or how Earth creatures look.  But this may be an inevitable awkwardness of portraying utterly alien perspectives, and I give Asher a lot of credit for tackling those perspectives.

As in all his books, Asher delights in exploring how technologies work using exotic physics and materials, and how characters solve problems with those technologies.  Although many of the technologies, such as faster than light travel or runcibles, amount to magic, he puts a veneer of science on all of it.

Sometimes the book focuses so much on these technologies and their use that it starts to feel like descriptions of players in a game.  And as I noticed in my review of Dark Intelligence, I think Asher sometimes gets a little too carried away with the detail, making some of his writing tedious to get through.  But for the descriptions you like, they are mind candy.

This is space opera in its grandest tradition, involving gargantuan technologies, aliens, heady concepts, the return of an ancient threat, and action galore.  It is the first book in a series, so it does end with cliffhangers.  The technologies invoked often border more on fantasy than science fiction, but if it’s your cup of tea, I highly recommend it.

5 thoughts on “Recommendation: The Soldier”