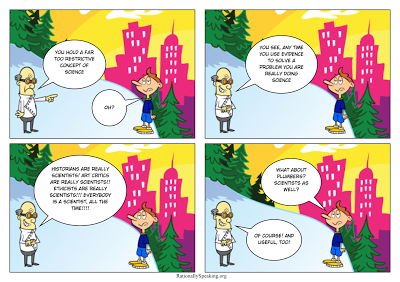 Massimo Pigluici has a cartoon response up on Rationally Speaking in reply to Sam Harris’ Edge response.  Harris thinks that science is defined too narrowly, is suspicious of talk of the limits of science, and sees the distinction between science, philosophy, and history as illusory.

Massimo sees this as too broad.  I may be missing some subtleties, but his conception of science is basically what professional scientists do.  It’s about people who follow rigorous scientific methodologies, publish in scientific journals, etc.  According to Massimo, you’re not being scientific if you test which route too work is fastest, even if you’re being systematic about it.

I think both of these guys are wrong.  Massimo’s conception of science strikes me as too narrow.  I can be an amateur painter, making paintings of very poor quality that couldn’t be sold anywhere, but I would still be a painter.  I could be a musician in the same regard.  Why then am I not a scientist, albeit an amateur one, when I’m systematically testing which route to work takes less time?

I think defining science as only something that professional scientists engage in clouds people’s understanding of what science basically is.  If you’re making systematic observations, making theories based on those observations, theories which get stronger or weaker with additional observations, then you’re doing science.

The professionals may do it with far more rigor and expensive equipment, but it doesn’t change the fact that you’re engaging in the same type of activity.  I think when people understand this simple concept, their conception of science is more accurate than when they assume that it’s some kind of necromancy that only those fully initiated into the arts can even approach.

On the flip side, Harris’ view of science goes too far in the other direction.  He doesn’t want to admit that there are any valid forms of knowledge outside of the domain of science.  (And of course, in his Edge response, typically takes the opportunity to blame religion for what he describes as the confusion on this topic for why we all don’t agree with him.)

I’ve already written long posts about the differences between science and philosophy, and another post detailing why science can’t determine morality (or why philosophy can’t either).

I’ll just summarize here by saying that if you’re conducting logical assessments far beyond the realm of empirical investigation, or reasoning about matters where everyone agrees what the evidence is but still disagree about what ought to happen, then you’re not doing science, but philosophy.  It’s the classic is / ought problem, and Harris may like to think he has banished it, but he only has for people who don’t really understand it.

9 thoughts on “Do we all do science?”