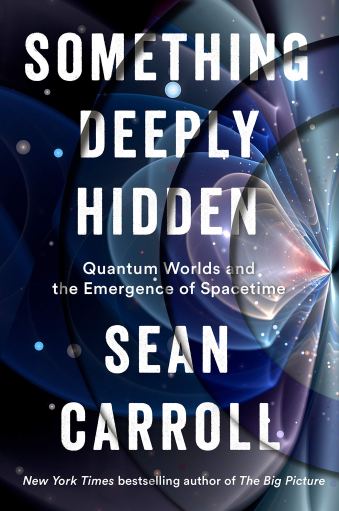 I’m just about finished reading Sean Carroll’s Something Deeply Hidden.  I was going to wait to post this until I’d completely finished, but all I’ve got left is the appendix, I perceive that I’ve gotten through the main points, and discussion on the previous post is veering in this direction.

As widely reported, Carroll is an advocate for the Everettian interpretation of quantum mechanics, generally known as the Many Worlds Interpretation (MWI).  I gave a primer on this back in December.  Nothing in Carroll’s book invalidated that description, so if you need the basics, check it out.

Carroll’s broad point is the MWI, in terms of the mathematical postulates, is the most austere interpretation.  Its central premise is that we should ask what happens if quantum systems evolve solely based on the Schrodinger equation.  Doing so leads to a deterministic theory that explain our observations and preserves realism and locality, which makes it broadly compatible with special and general relativity.

The basic idea is that the wave function never collapses, it just becomes entangled with the waves of other quantum systems.  We see this in experiments, where particles that interact don’t experience collapse, but merely become entangled.  And physicists have been able to isolate ever larger molecules and keep them in states of quantum superposition.

The Everettian view is, never.  The superposition of the initial quantum system never collapses, it continues spreading.  We perceive it to have collapsed, but that’s only because it’s spread to us, and we’ve become the version of us looking at one particular outcome, with other versions in other branches of the wave function looking at the other outcomes.

One thing I was hoping to get from Carroll was a description of how the MWI avoids the issues with Bell’s theorem.  That theorem notes that if all the states of entangled quantum particles are set when they become entangled, the statistics of various outcomes will be constrained in a way that they won’t be if the states aren’t set until they’re measured.

Numerous experiments have verified that the statistics match the values not being set until the measurement.  This is an issue for Copenhagen and other interpretations because under them, in order for the entangled relationships to hold, the measurement results have to be communicated to the other particle in some sort of faster than light communication, violating locality, Einstein’s spooky action at a distance.  (But as I noted in the previous post, not in any way that’s actually useful.)

The main thing Carroll says about this is what I’ve seen from other sources.  Bell’s theorem assumes a definite outcome to the measurement.  But since in MWI there are no definite outcomes, every outcome is realized, the theorem doesn’t apply.

(Maybe under MWI, the statistics aren’t constrained in any one branch of the wave function because the outcomes are spread over all the branches, but that’s my speculation.)

Another question I hoped to see an answer to is how much branching a quantum interaction causes and at what resolution?  For a binary result, like the direction of spin, the answer should be two.  But the location of a particle is spread out in a wave, and elementary particles are points in space.  How many branches does that wave result in?  Carroll admits that we don’t know.  We just don’t know how granular the universe is.  He notes that Everett himself considered it plausible that the number might be infinite, which I can’t see as a strength of the theory.

Another question is whether the branching happens all at once, an entire universe instantly created, or gradually from the interaction outward.  My primer post and description above inherently assumes that the answer is gradual.  But Carroll states that it can be accounted for both ways.  It’s hard for me to see how creating an entire universe billions of light years wide, all at once, preserves locality, so I’m not sure how this can be true, except perhaps in an instrumental manner.  But an appeal to instrumentalism here seems wrong since the whole point of the MWI is to find the reality behind the observations.

Carroll also briefly considers the question a lot of people wonder about, if reality is branching like this, where are all these branches located?  Carroll’s reply is that the branches aren’t “located” anywhere.  They’re all right here, just not in a way that they can interact with each other.  While I think I understand this point, it’s undoubtedly one that a lot of people struggle with, and I don’t think Carroll addresses it sufficiently.

Another question is the conservation of energy.  Where does the energy for all these different branches come from?  Carroll’s answer is that the original energy of the universe is constantly being spread out among the branches, albeit not evenly, but according the amplitude of each outcome in the wave function.

But here is where the infinite branching point above becomes more problematic.  If the energy is being diluted throughout the branches, and there are an infinite number of those branches, does that mean the energy started out as infinite?  These two answers don’t seem to fit together.

One point Carroll does make clear, our personal decisions do not cause branching.  The branching is caused by quantum events.  Of course, in some of those branches, we might make different decisions, so the effect might be that there are universes with us making varying decisions, but it isn’t guaranteed.  Indeed, I tend to think that most branches will look identical at the macroscopic level, with the differences only being at the microscopic quantum level.

Carroll also discusses what you need to do with Everettian physics if you don’t want the other branches, the many worlds.  You have to add something to the formalism to accomplish this.  He looks at the deBroglie-Bohm pilot-wave theory, which although older than the MWI, could be seen as Everettian physics plus a particle that reifies one of the branches as the real one.  He also looks at GRW, an interesting premise that maybe quantum systems simply spontaneously and randomly collapse, but since they do so very rarely, we usually only see the collapse in association with large macroscopic systems.

The main thing to understand is that each of these additions come with a cost.  With pilot-wave, it’s explicit non-locality.  With GRW, it’s a largely ad-hoc premise whose only purpose is to ban the other worlds.  He discusses other alternatives with similar issues.

Carroll doesn’t address it, but a common move in the physics community is to accept Everettian physics itself, but simply say that the other worlds aren’t there.   This is known as the unreal version of the interpretation.  My issue with this move, aside from the absence of any explanation for why only one of the branches is the real one, is that it reminds me of the Tychonic System.

In the decades between when Copernicus proposed the sun centered model of the solar system and Galileo was able to produce empirical observations that supported it, Tycho Brahe proposed a compromise model, where a lot of the planets orbited the sun, but the sun continued to orbit the Earth.  It was an attempt to get the benefits of the elegant mathematics of the Copernican model, while preserving the “philosophical benefits” of the Earth centered Ptolemaic system.  Today it’s obvious that this was a misguided attempt to save appearances, but it wasn’t obvious in the late 16th century.

Along similar lines, Chad Orzel recommends that we not consider the other worlds as real, but merely as metaphors, accounting devices.  This is also reminiscent of one of the most common moves during the 16th century, to say that Copernicus’ crazy claim that the Earth moves shouldn’t be taken literally.  It should be regarded merely as a mathematical convenience.  Max Planck made a similar move when he first introduced quanta into his calculations.   The claim is, not to worry, it’s not like this crazy thing is real; it’s just an accounting gimmick.

I don’t know whether the MWI is reality or not.  As I’ve noted many times, I think it’s a candidate for reality.  But if you find the mathematics of the Everettian view elegant, and want the benefit of that elegance, then I think you should either accept the consequences (many worlds) or find a good reason to reject those consequences.  (A theory of quantum gravity might eventually provide a reason, but that’s speculation.)

Toward the end of the book Carroll gets into stuff involving the possible emergence of spacetime from quantum mechanics, which I found difficult to follow.  He does point out it’s difficult to work with quantum mechanics in terms of cosmology without, at least implicitly, working under the MWI.

Finally, in the epilogue, he reveals the the title comes from something Einstein wrote describing his wonder as a child that something about the workings of a compass implied, “something deeply hidden.”

All in all, I found the book a good discussion on these topics.  That said, Carroll isn’t really striving for even handedness here.  He’s a partisan for a particular view, and it shows.