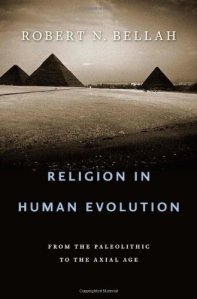 I recently read the late Robert Bellah’s ‘Religion in Human Evolution: From the Paleolithic to the Axial Age.’  Although the title of the book seems to narrow it to just religion, in ancient societies, religion was just about everything, so the book ended up being about the development of cultures, which isn’t too surprising given Bellah’s background in sociology.

Bellah discusses different stages of cultural transmission.  Each builds on the previous ones, with theoretic being the final one.

The earliest stage, which strictly speaking isn’t really cultural transmission but it’s a crucial building block, is episodic memory, that is remembering specific events and situations and recalling them when encountering similar new events.  Episodic memory is evolutionarily ancient, going back hundreds of millions of years.  It added the ability for an animal to respond to situations outside of their instincts.

Not nearly as ancient, but still very old, is mimetic culture, the ability to observe what others are doing, learn from it, and adopt it for your own use.  Mimetic culture is most developed in social animals, particularly in primates, and of course most thoroughly in humans.  Long before language, primates observed each other and learned from their actions.  For example, in a tribe of chimpanzees, when one figures out a new way to use a stick to find food, other monkeys observe and adopt the technique, and it becomes part of that tribe’s culture.

It’s from mimetic culture that ritual arises.  And ritual forms a core aspect of Bellah’s thoughts about religion.  Ritual predates religion and, in Bellah’s conception, lies at the center of it.  Ritual is a core part of the enactive aspect of religion, the part that makes the religious beliefs feel real.  It’s also why many other ritualistic aspects of culture, such as civil ceremonies and sports events, often have a borderline religious feel to them.

On top of mimetic culture, we have narrative culture.  (Many call this “mythic culture”, but Bellah prefers the more value neutral term “narrative”.)  Narrative culture, the transmission of cultural information through stories, is almost certainly as old as spoken language.  It’s the predominate form of cultural transmission in oral cultures, that is, cultures that aren’t yet literate.

Bellah refers to pre-axial state cultures, such as ancient Egypt, Sumer, and Akkad, as archaic societies.  He emphasizes that those that had writing remained largely oral in orientation.  Reading and writing in cuneiform and hieroglyphics were complex, difficult, and reserved for a small class of professional scribes.  The majority of these cultures, even among the elite, were still oral.

(I’d never realized this until reading Bellah, but this is why virtually all of the earliest literature is poetry or chants.  Stories told in meter were much easier to remember.  The oldest sagas were almost all orally composed, including such epic poems as the Iliad or the saga of Gilgamesh, or aphoristic collections such as the Vedas.  The oldest writings were recording oral information then widely in circulation.  Prose only begins to proliferate when literacy starts to become more pervasive, at least among the ruling classes, when there is an audience that will be able to read it without having to commit it to memory.  And that only happens with the prevalence of relatively simple writing systems such as the Phoenician and Greek alphabets.)

As archaic societies developed, they began to engage in what Bellah calls mytho-speculation.  This is not just repeating and recording oral mythologies, but speculating about how the world is put together, about the attributes of the gods, and other aspects of reality.  This became prominent in the Egyptian New Kingdom with the rise of theological writing, particularly in the fascinating case of the pharaoh Akhenaten, who attempted to found a new monotheistic religion in Egypt, developing the idea of his god, Aten, in a mytho-speculative manner.

Bellah never explicitly defines mytho-speculation, but I interpret it as someone consciously pondering reality (either sincerely or manipulatively), rather than merely repeating traditional stories that evolved organically across generations and centuries.  Bellah argues that the people later retroactively defined as the pre-Socratic philosophers (that is, Greek philosophers before Socrates), were actually more engaged in mytho-speculation than theoretic culture, that the earliest pre-Socratics didn’t attempt to justify their speculation, they just engaged in it.  Given the very limited knowledge we have of these early pre-Socratics, I think we have to be cautious in categorizing them, but it stands to reason that thought would have evolved through stages.

It’s in the Axial Age that, Bellah argues, theoretic culture arises, that is, culture that thinks explicitly about how to think.  Bellah identifies the pre-Socratic philosopher, Parmenides as providing a major breakthrough in Greek culture by developing the philosophical argument.  (See Michelle Joelle’s excellent recent post about philosophical arguments.)  What Permenides introduced, Plato more fully developed, and theoretic culture was established in Greek society.

Of course, it wasn’t only in Greece that theoretic culture arose, but also in India with Buddhism, and in China with Confucianism.  This is why this period is called the Axial Age.  (That and the fact that it happens to sit at the mid-point, the axis, of written history, roughly equidistant between the development of writing and modern times.)

I’ve written before that I think the rise of simple phonetic alphabets was what led to the Axial Age, at least in the west.  I’ve read other speculation that it might have been from increases in agricultural production that led to larger surpluses than what had come before, allowing for a larger intellectual class.  I suspect there were multiple causes that reinforced each other.  But, interestingly, Bellah and other scholars seem to think that writing was a result of the Axial Age rather than a cause.  I’m not entirely sure the chronology bears that out, except possibly in India, where post-Harappan writing apparently didn’t get off the ground until after the Axial Age.

I’m also not entirely sure that we can even say that theoretic culture didn’t exist before the Axial Age.  It’s just the earliest time that we have evidence for it since it’s the time that literacy starts to become (relatively) widespread and opportunities for that evidence to be recorded become pervasive.  Who knows what the thinkers in ancient Egypt or Sumer thought, or how much the Greeks might have owed to and built upon their ideas?  It’s worth noting that although writing goes back to around 3000 BC, studying history before the Axial Age is mostly an archaeological exercise, but becomes much more about studying historical documents afterward (again, at least in the west).

But I don’t think there’s much doubt that theoretic culture became far more advanced, as the thoughts of thinkers began to be recorded, read by later thinkers, and built upon in a way far more sophisticated than was possible in oral cultures.  It ushered in a new age of human cognition.

But it’s not like we crossed the theoretic divide and achieved cultural maturity in the Axial Age.  As I’ve written about before, science in particular looks very different today than it did only 400 years ago.  We may have begun the theoretic journey c. 500 BC, but we are still definitely on it, and with the breakneck advances in communication, such as the internet, we may well be entering a new axial age.

21 thoughts on “Religion, the Axial Age, and theoretic culture”