The Fermi Paradox is the observation that if intelligent life is pervasive in the universe, it should have arrived on Earth ages ago, but there is no evidence it ever did.  The solutions to the paradox include the possibilities that interstellar travel is impossible (or so appallingly difficult that no one bothers), that there is something out there suppressing the development of intelligent life, or that intelligence capable of symbolic thought and technological development is profoundly rare in the universe.

There’s a new model which lends credence to the last possibility.  Looking at chemical and genetic pathways, this model predicts that we may be the only technological civilization in the observable universe.  I’ve written before on the reasons to think that our nearest intelligent neighbors may be cosmically distant.  Life appears to have started early in Earth’s history, but intelligent life took billions of years to emerge, and only did it once, at least so far.  And its development seemed highly dependent on a large number of low probability events throughout Earth’s evolutionary history.

So the common science fiction trope of us encountering an alien intelligence may never happen.  If we meet other intelligent entities, it seems far more likely they’ll be ones we created rather than ones who evolved independently.  These might be technological AI (artificial intelligence) or they might be animal species we “uplifted”, that is, genetically modified to be more intelligent than evolution made them. 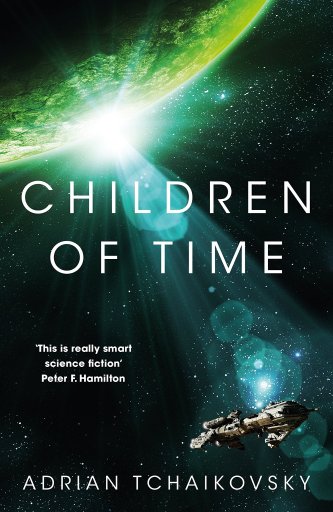 At the beginning of Adrian Tchaikovsky’s Children of Time, humans have begun terraforming a number of exoplanets for eventual habitation.  On one of these planets, the egotistical and misanthropic Doctor Avrana Kern plans to uplift a species of monkey.  The idea is to release the monkeys on a terraformed planet with lots of Earth life (including most animal species) along with a virus to guide the monkeys’ rapid evolution into sapience.  Eventually they would be guided by a scientist left behind in orbit, all in order for them to be ready to help human colonists when they eventually arrive.

But the scientist recruited for the guidance role turns out to be a religious fanatic who destroys the scientific mission, killing all the scientists and the monkeys.  Only the arrogant Kern herself survives, trapped in orbit, stuck in the guidance role she envisioned for another.  The uplift virus does get delivered into the planet’s biosphere, but without the monkeys it will have unforeseen consequences.  Shortly afterward, Kern loses all contact with humanity, receiving just enough clues to deduce that human civilization has destroyed itself in war.

Across the millenia, the virus, engineered to avoid working in mammalian species other than the monkeys it was programmed for, begins working in arthropod species, particularly spiders.  Gradually the spiders evolve into an intelligent species and begin building a civilization.  Eventually they realize that there is a Messenger in the Sky (in actuality the trapped scientist Avrana Kern, who has by now effectively merged with the AI managing her craft) and begin worshiping it.

Meanwhile on Earth, after several thousand years, civilization has slowly begun to recover, but the Earth is damaged by the previous wars, poisoned by biological weapons left behind from the war.  It gradually becomes apparent to this new civilization, still a technological shadow of the old one, that the poisoning has doomed them to eventual extinction.  In desperation, they send out colonization sleeper ships to the terraformed worlds.

One of these ships, the Gilgamesh, has Kern’s world as its destination.  But when they arrive, they encounter a now deranged Kern who successfully chases them away with superior technology.  But not before they’re able to see a world that has been successfully terraformed, albeit one inhabited by “monsters” (the spiders).  They leave, but both they and Kern know their options are limited, and that they’ll be back.

Two story threads then run in parallel, one of the spiders and their climb into a civilization that may be able to protect their world from invaders, and another of humans desperately attempting to survive in space, preparing for what they hope will be a successful return to claim Kern’s world for their own.

This book explores a lot of philosophical concepts, such as humanity’s apparent need to always be at war with itself, the nature of religion, and the plausibility of uploading minds.  It also explores how an arachnid species might see the world, and how this worldview might affect the technologies and civilization it develops.  Attempted communications between the species show just how alien an intelligent arachnid species might be, even when it’s descended from the same biosphere as humanity.

The book is also a gripping story.  On the human side, the story is told from the point of view of Holsten Mason, a classicist on the Gilgamesh familiar with the history of the old destroyed civilization, who is often able to compare it with what he sees happening with his own society.  The Gilgamesh has received no signals from the other colony ships.  They appear to be the only surviving one, effectively making them humanity’s last chance, raising the stakes to survival of the species.

My only real gripe with this side of the story is that fuel, and the related logistics, are never mentioned.  The interstellar sleeper ship (and eventually generation ship), the Gilgamesh, is apparently limited to a cruising velocity of 10% light speed.  The reasons for a limit like that in space always come down to fuel efficiency.  Yet there is never any discussion of finding fuel for the ship when it’s in a solar system.  But this is really just a pet peeve on my part, a reaction to a common failing in space opera.  In fairness, Tchaikovsky mostly steers clear of discussing the drive technologies on the ships (except toward the end), so he does leave conceptual room for these issues to be handled behind the scenes.

On the spider side, Tchaikovsky, using an omniscient narrator, provides human names to the spiders, such as “Portia”, “Bianca”, and “Fabian”, while making it clear that these are placeholders for a species that communicates with vibrations made by their legs on web strands, for actual names that would be utterly alien to humans.  The human names are reused for various spiders with similar personalities throughout their civilization’s history.  The effect is that it provides a semblance of continuity in the narrative that actually works fairly well.

The book won the British Arthur C. Clarke Award for Best Novel, and has received wide acclaim.  Lionsgate is reportedly working on a film adaptation, although I wonder how they plan to handle the spiders.  The alien nature of the spiders works in the book because the story is told somewhat from their perspective, but it seems like a movie would have to make significant compromises.  It will be interesting to see how it’s handled.

Anyway, if you like hard(ish) space opera, and don’t mind reading a story with significant portions told from an alien perspective, I highly recommend this book.  In some ways, it reminded me of Vernor Vinge’s A Deepness in the Sky, which also has a spider civilization in it, although Vinge’s spiders are true aliens, as well as the movie Battle for Terra, which has a conflict between desperate humans and a native species on their target world.  Children has enough original material that it never feels derivative, but if you enjoyed those other stories, you’ll probably enjoy this one.

12 thoughts on “Recommendation: Children of Time”