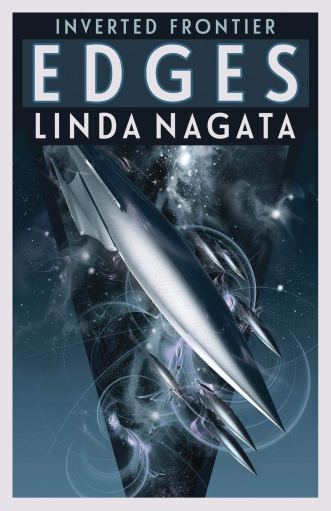 A few weeks ago I recommended Linda Nagata’s novel, Vast, the final book of her Nanotech Succession series.  Edges is both a sequel to that book, and the first episode in a new series, Inverted Frontier.

As in Vast, this is a future where mind uploading and copying is possible, where multiple copies of someone’s mind can run in computer systems, where new bodies can be grown on demand, and so where everyone is, in principle, immortal.  This is handy, because FTL (faster than light) travel is impossible, so interstellar travel takes decades or centuries.

I said immortal “in principle”, because this is a dangerous universe and survival is far from guaranteed.  As humans spread throughout interstellar space, the systems closest to the interior of human occupied space build vast Dyson swarms, called cordons, that effectively wall themselves off from the rest of the galaxy.

The frontier worlds on the outskirts watch through telescopes as the inner systems disappear behind the cordons.  Then, centuries later, the stars, one by one, reappear, apparently indicating that the cordons have collapsed.  The frontier worlds do not know if anyone survives in these regions.

During this time, the frontier worlds have had their own problems.  A fleet of automated alien ships, called the Chenzeme, appear and begin destroying the human colonies.  By the time of Vast, most of humanity has been wiped out.  Vast is a story of characters setting out to discover the source of the Chenzeme.

In Edges, two characters from Vast, or more accurately, two copies of characters from that earlier story, reunite and decide to explore in the direction of the inner worlds, to learn what has happened in those ancient systems, now known as the Hallowed Vastries.  They recruit a crew and begin a centuries long journey to discover what remains in those systems and see if anyone else is alive aside from their homeworld on the edge of human space.

As in Vast, there’s a lot going on in this novel.  The concept of characters spreading themselves out among several copies, and syncing memories as needed, is explored in detail.  One of the characters, Urban, in order to take over and control one of the Chemzeme coursers, has split himself into several specialty copies.  Another, Clementine, has a copy of herself that is forced to become less human, and so refuses to share her memories with her other selves to avoid contaminating them.

As in the earlier book, nano technology features heavily.  Ships and systems in these stories are living things, growing and adapting as needed for different situations.  And often battles happens at the microscopic level between legions of nanotech entities.

A substantial part of the book is spent exploring the society that ends up forming in the ship heading into the inner systems.  A little too much for my tastes.  But unlike Vast, this book has a healthy dose of action, including an explicit villain.

On the edges of the inner systems, the ship encounters a powerful being, shattered from an earlier defeat and exiled, but hungry for revenge and eager to find a ship to take him back.  Naturally our protagonists aren’t willing, which results in a contest that forms the central conflict of the book.

As advanced as the technology is in the story, we get the definite impression that the shattered being is far more advanced, and powerful, even in his compromised state.  And we get glimpses of technology far in advance of the culture that the main characters come from.  In this first book, they are only glimpses, with the promise of more to come.

If philosophical and mind bending space opera is your cup of tea, then I highly recommend Nagata’s books.  As I noted before, I think she is an underappreciated talent.  The imagination shown in her work is as sublime as anyone else I’ve read.