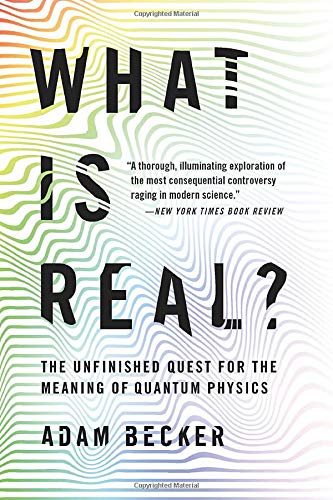 Last week I started listening to a Sean Carroll podcast episode, an interview of Adam Becker on his book, What Is Real?: The Unfinished Quest for the Meaning of Quantum Physics.  Before even finishing the episode, I downloaded Becker’s book and read it.

Becker starts out in the early decades of the 20th century, when quantum physics was still being worked out.  He takes us through the early controversies starting at the famous Solvay Conference.  He covers select details of the personal lives of many of the physicists involved, including the fact that many of them were Jewish and starkly affected by the deteriorating situation in Europe in the 1930s.

He describes the effects that World War II had on the physics community, shifting its center from Europe to America, along with the postwar influx of big money from the military and corporations, turning a small community of philosophically minded physicists into a much larger and more pragmatic field, a shift that likely affected the field’s attitudes toward exploring the foundations of quantum physics.

It’s often said that the Copenhagen Interpretation of quantum mechanics is the default one, but Becker points out that there isn’t really any one interpretation that everyone agrees is the Copenhagen one.  Talk to physicists who accept it and you’ll get a fairly wide variety of viewpoints, with Neils Bohr, generally cited as the primary originator of the interpretation, himself providing a lot of contradictory commentary on it.

Measurement is a key event in most versions.  But what exactly is a measurement?  Bohr insisted that the language describing a measurement must be in ordinary language, and resisted any attempts to be more precise, such as describing the measuring apparatus from a quantum perspective.  To me, this implies an epistemic stance, about the limits on what we can know, but his language is reportedly pretty unclear on this.

From the beginning, there were people who weren’t satisfied with the Copenhagen explanation.  One of the first to provide an alternative was Louis de Broglie.  He proposed an alternative explanation at the 1927 Solvay conference involving a particle and a pilot wave, but wasn’t well prepared to answer criticisms and quickly withdrew it.

Albert Einstein, himself one of the early pioneers of quantum physics, was also not happy.  It’s commonly assumed that Einstein’s chief beef with quantum physics was its lack of determinism, but Becker points out that his real complaint was the lack of locality, and its implications for special and general relativity.  The famous EPR (Einstein-Podolsky-Rosen) paper in 1935 was mostly about the fact that quantum physics, as currently envisioned, involved “spooky action at a distance.”  This is also shown by the fact that, although Einstein knew about the de Broglie-Bohm pilot-wave interpretation, he wasn’t enthusiastic about it.  It preserved determinism, but still had non-local effects.

Speaking of the de Broglie-Bohm interpretation, Becker covers the travails of David Bohm.  Bohm had Marxist leanings, which got him into hot water during the McCarthy era.  He ended up losing his job and having to leave the country.  After independently coming to the same conclusions de Broglie had decades earlier, he was able to clean up the pilot wave interpretation.  But the taint involved with his politics likely affected the reception of his ideas.

Hugh Everett is commonly described as bitterly leaving academia after the chilly reception of his interpretation, the one that would eventually be known as the Many Worlds Interpretation(MWI).  But Becker points out that Everett never planned an academic career, wanting a more affluent lifestyle which a career in the defense industry provided.

Given that the MWI manages to preserve both locality and determinism, I sometimes wonder what Einstein would have thought of it.  He died in 1955, a couple of years before Everett’s paper in 1957.  What would have been his attitude toward it?  It’s worth noting that Erwin Schrodinger mused about a similar possibility in 1952.  Maybe Einstein also thought of it but didn’t consider it worth the conceptual cost.

Becker also covers John Stewart Bell and his theorem.  Bell managed to take a metaphysical debate and turn it into a scientific one with possible experiments to test the idea, experiments which were later conducted.  These experiments verified the non-local nature of quantum physics (for interpretations other than MWI and its cousins).

This is a fascinating book, with a lot of interesting history.  It provides a particularly stark picture of people enduring terrible costs to their career for daring to explore radical ideas.  But it’s not without its issues.  Becker makes no pretense about being even handed.  He is a partisan in the interpretation wars.  Much of the book is a sustained attack on the Copenhagen Interpretation, and he seems to gravitate toward somewhat strawmannish versions when describing it.

This extends to his descriptions of its proponents such as Niels Bohr or Werner Heisenberg.  Bohr is often described as a slow thinker and unable to communicate clearly, and in the later parts of the book he becomes something of a nemesis, suppressing alternative ideas as they come up.  Heisenberg is described as a status conscious individual with questionable ethics leading him to work with the Nazis, then trying to spin his involvement after the war.

Heisenberg may indeed have been a piece of work.  But in the case of Bohr, his description in this book seems incompatible with the esteem in which he was held by the physics community.  In my experience, when a historical figure is described as clueless but nevertheless has consistent and ongoing success, it usually means that description is skewed, and that was the sense I got here.  Becker ascribes Bohr’s prestige to his charisma, but I doubt it was only that.  The charisma / personality explanation smacks of rationalizing, that people simply couldn’t have thought his actual ideas had merit.

My suspicion in this regard was also fueled by Becker’s discussion on the philosophy of science.  He (probably accurately) describes the influence logical positivism had on Bohr and his collaborators, but he lumps Karl Popper’s falsifiability in with the verifcationism of the logical positivists (even though Popper was an opponent of logical positivism).  And Becker rails against instrumentalism, but his criticism is of a silly version that few modern instrumentalists would ascribe to.

In general, Becker seems impatient with epistemic caution.  For him, physics is about describing the world, and he doesn’t want to be constrained by things like testability.  So he’s enthusiastic for various interpretations even though none of them are uniquely testable, as well as multiverses and all the rest.  He seems unable to see any validity in the discomfort many physicists have with speculation too far removed from experimentation.

All that said, I enjoyed this book and generally do recommend it for getting an idea of the human stories associated with quantum physics, even if its often not an objective one.

17 thoughts on “Recommendation: What Is Real?”