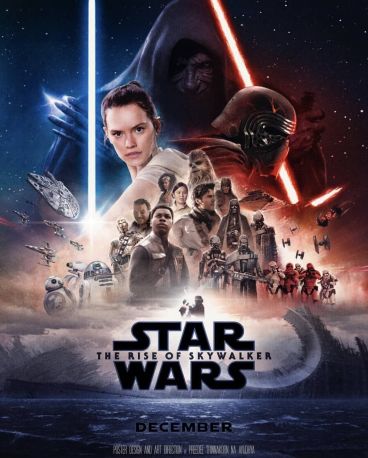 I noticed today that it had been released for streaming, so I went ahead and watched.  (I missed it in the theaters.)  Based on everything that had been said about it, it was better than I expected.  It was entertaining and Abrams managed to get the emotional high points right.  It felt like a decent conclusion to the saga.

And yet this movie, like the entire new trilogy, seemed primarily backward looking in its orientation.  I personally never connected with the new characters as much as the old.  Likely a lot of that had to do with my age.  I was 10 when the original movie came out, but as a middle aged guy, the new story never loomed as large as it did for that kid in the late 70s and early 80s.

And you can tell that the real goal of the trilogy was to act as a bridge between old classic Star Wars and the new batch of movies and shows Disney now wants to produce, shows like The Mandalorian, which I watched and enjoyed, but in a rather bland sort of way.

With that goal, the trilogy felt like something I remember the first sequel of Star Wars managed to avoid.  The Empire Strikes Back, when it came out in 1980, surprised everyone by not being what most sequels had been until that time, a slightly lesser version of the original designed to cash in on the original’s name recognition.  Empire actually continued the story, and is often regarded today as the best in the series.

But this latest trilogy, in many ways, felt like the Star Wars 2 seasoned movie goers were expecting in 1980, particularly with the recycling of the Death Star, Death Star like weapons, and villains.  It was somewhat mitigated by modern first class production values, but the story in many ways feels like a retread.

To be fair to the current producers, George Lucas tried to pull off the same thing with the prequel trilogy that he’d done with Empire, to expand the universe and show us aspects of it we hadn’t seen before, but this time to widespread ridicule and derision.  (Admittedly, the writing for the prequels was also lackluster, and they too were backward looking in their own way, being preoccupied with establishing the background for the classic trilogy.)  So it’s somewhat understandable that Disney took a conservative route with the new movies.

But you have to wonder what the new trilogy might have been if they’d tried the Empire move again.  In interviews, Lucas provided some hints about where he might have gone if he’d made the final trilogy, and it sounds like it would have been very different, verging on metaphysical, exploring the microscopic mechanisms of the Force, which were hinted at in The Phantom Menace, again to fan derision.

Lucas admits fans probably would have hated it, and the example of the prequels didn’t give him much hope.  Based on what I’d read, the chance of that final trilogy happening under Lucas was remote anyway.  Still, if a novel, graphic novel, or something else along those lines about it were ever commissioned, I’d be tempted to read it.

Anyway, The Rise of Skywalker was very entertaining.  It continues to be a space fantasy, with heavy emphasis on the “fantasy” part.  Abrams didn’t concern himself much with canonical consistency or rigorous logic.  But he knows how to tell a story, and I was surprised by how much I enjoyed it.

Have you seen it?  If so, what did you think?

12 thoughts on “Star Wars: The Rise of Skywalker”