One of the things that I think is often not appreciated about petroleum oil, is that it’s essentially stored solar energy.  Energy that was originally captured by life forms that died, sank to the bottom of oceans or lakes where under stagnant water they couldn’t decompose, and were eventually covered and put under pressure.

This energy capture happened over hundreds of millions of years.  We’ve been burning through it in the last century or so, and while current projections are that we might have reserves for decades or possibly even centuries to come, eventually it will be used up.  It’s a non-renewable resource.

One of the challenges with renewable resources such as solar energy has always been capturing and storing the energy.  The solutions up to now have been expensive and problematic.  However, that appears to be changing.  Scientists have created a liquid fuel that can store solar  energy for up to 18 Years:

Scientists in Sweden have developed a specialised fluid, called a solar thermal fuel, that can store energy from the sun for well over a decade.

“A solar thermal fuel is like a rechargeable battery, but instead of electricity, you put sunlight in and get heat out, triggered on demand,” Jeffrey Grossman, an engineer works with these materials at MIT explained to NBC News.

The fluid is actually a molecule in liquid form that scientists from Chalmers University of Technology, Sweden have been working on improving for over a year.

This molecule is composed of carbon, hydrogen and nitrogen, and when it is hit by sunlight, it does something unusual: the bonds between its atoms are rearranged and it turns into an energised new version of itself, called an isomer.

Like prey caught in a trap, energy from the sun is thus captured between the isomer’s strong chemical bonds, and it stays there even when the molecule cools down to room temperature.

When the energy is needed – say at nighttime, or during winter – the fluid is simply drawn through a catalyst that returns the molecule to its original form, releasing energy in the form of heat. 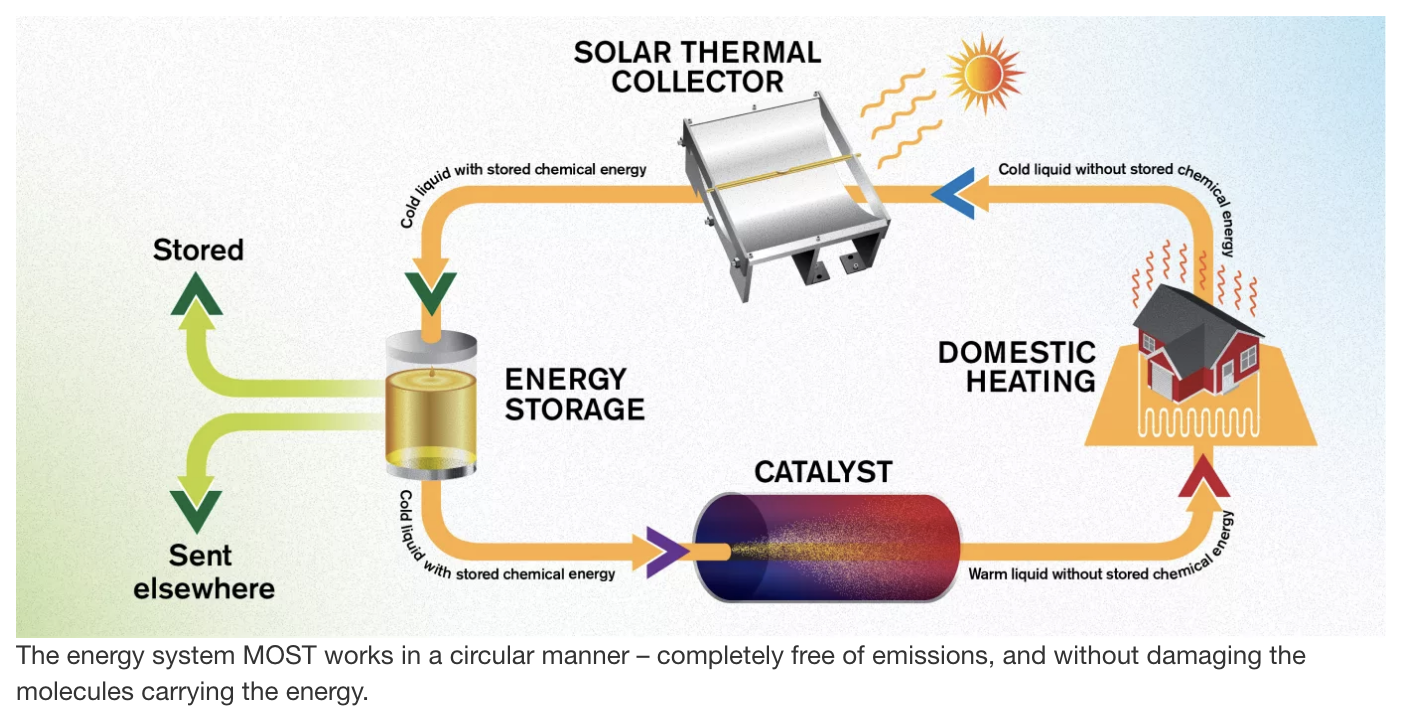 The article goes on to describe in detail how it works, that research in this area is ongoing, and that we can expect the fuels to become denser and more efficient.

I’m not an energy expert, but this seems like a significant development.  We may be essentially inventing the ability to produce our own gasoline from solar energy.  Granted, it may not have the energy density of refined petroleum, but it sounds like that’s a gap that may close in time.

And as the technology matures, it may hasten the transition away from fossil fuels, which would be good news for the environment.  Some mornings it’s easy to feel optimistic about the future.