A nice video.  I’ve read about quantum decoherence and entanglement several times, but seeing it animated helped.  At least for me. 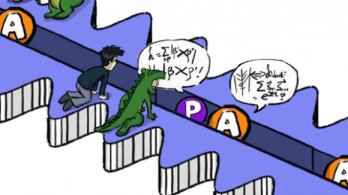 Confused by how particles can be in two places at once? Wondering how particles can instantly communicate with each other no matter what the distance? Quantum physics is a field of study that defies common sense at every turn, and quantum entanglement might lead the way in the defying common sense department. Entanglement is the unusual behavior of elementary particles where they become linked so that when something happens to one, something happens to the other; no matter how far apart they are. This bizarre behavior of particles that become inextricably linked together is what Einstein supposedly called “spooky action at a distance.”

This new video from PHD Comics provides a combination of live action and animation to try to explain entanglement.