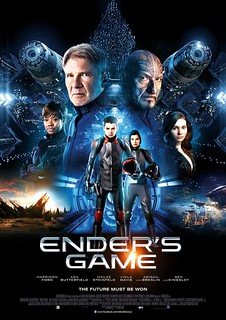 In his early career, I was enthralled by the works of Orson Scott Card.  He had the ability to create vivid phantasmagorical worlds with protagonists in agonizing situations that you couldn’t have anything but sympathy for.  In college, I was in a science fiction book club, and accidentally received one of his books, ‘Wryms’.  I was surprised by how good it was, and subsequently searched out everything of his I could get my hands on at the time.

I think in his novel, ‘Ender’s Game’, Card was at his peak.   A tale of brilliant but very young children caught up in deadly serious story of humanity’s war with an alien species.  Like many of his early novels, it haunted me long after I had finished it.

Card remains a master story teller, but I haven’t found his later work to be anywhere near as compelling.  And it’s pretty well known that he lost a lot of fans and goodwill with his blinkered views on homosexual rights and gay marriage, some of which he let bleed into some of those later stories.

That said, I don’t recall anything like that in the novel, and this review is specifically about the movie.  For an adaptation, it follows the book fairly well, at least as far as my memory is concerned.  (It’s actually been at least twenty years since I read the book.)  One significant deviation is that the children are older in the movie than in the book, but I’m willing to give the producers a break on that given the challenges they would have faced with very young actors.

Overall, the movie is well made, with high production values, excellent casting, and superb visual effects.  Asa Butterfield nailed the right combination of vulnerability, empathy, and tactical brilliance of the main character.

I was also impressed that the space sequences didn’t completely abandon Newtonian mechanics for spacecraft maneuvering, at least in the early parts of the film.  The orbiting battle school sequences are not that far off from how I remembered imagining them in the book.

The movie does deviate a bit in the second half.  The advanced training takes place on a planet near the alien’s home world instead of on an asteroid in our solar system.  The exact reasons why show up in the last parts of the movie, where the producers obviously wanted to find a way to quickly work through the final parts of the story that, in the book, took place over several years.

And I think that brings me to my chief criticism of this film.  It wants to move fast, probably too fast to tell the complex story of the novel.  It ends up omitting things that added a lot of richness to the story.  Of course, every film adaptation does that, but I think this one might have cut too much into the bone in the name of brevity.  The result was a story that, to me, felt rushed and didn’t capitalize as well on the emotional milestones of the novel as it could have.

That said, I enjoyed the movie.  It resembled the book well enough to recreate the surreal and tragic circumstances of the story.  This is a tale of children being manipulated by adults who understand themselves to be in a desperate fight to save humanity.  And that makes those adults willing to inflict incredible pressure on these children, and to put them at risk in questionable ways.

So, not as good as it could have been, but still recommended.